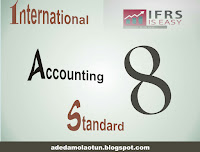 “It is a mistake not to make a mistake.”
Anonymous
Hello!

It’s another edition of IFRS is easy.

Charles, a chartered accountant has been preparing for marriage with his beautiful fiancée, Joy. He decided to hire the service of a professional photographer to cover the event. His hopes were high as he scanned through the previous captures of this photographer. One of his old friends had referred this photographer to him. He was so convinced of his ability that he decided to pay 80% upfront for the photographer’s service. Finally, the D-day arrived. The event was glamorous. The wedding planner did an impeccable job. Everyone was amazed at the beautiful designs and array of the wedding reception. The bride and groom were gorgeously attired. In fact, they were dressed to the nines. The event became a beautiful tale on the lips of everyone. Few days after the wedding, Charles demanded for the pictures taken by the photographer. The reply was shocking. There was no film in the camera used. The photographer had only taken flashes unknowingly all through the event. Gosh! An error had occurred. But then, even if Charles and his wife were to sue the photographer, the damage has already been done. It can’t possibly be rectified.

Issues of this might also find its way into the daily transactions of organizations. Some that can be rectified and some that possibly cannot. The question of seeking a redress arises as the stakeholders of the organization must not be misled by the presentations that appear on the financial statements. How do we correct errors? Are we obliged by IFRS to make adjustments?

Skills Inc. has been operating in the city of Lagos for the past five years. The company is seen as the largest employer of labor in the city. Misers, the previous Chief Executive Officer (CEO) was just kicked out of office. Maybe because of his inhumane deeds. Misers has been unfair to the workers as he displays a very strict handle on the issues of salary payment. When he came into office, he connived with some elements in the BOD to drastically reduce the New Year bonus of workers to a quarter of what it used to be. On 1st January 2016, Extravagant, the new CEO, discovered the need to change from the practice (convention) of paying peanut as New Year bonus. Hence, he declared a one month’s salary to staff as the new practice of New Year bonus payment.

This is just a tip of the iceberg. For more clarification and simplified explanation on the subject matter of IAS 8 –Accounting Policies, Changes in Accounting Estimates and Errors, click below to view or download the pdf.
View/Download

I hope our blog post has immensely been of help. You can also help us by dropping your comments, opinions and questions in the comment box.

Don’t miss any of the IFRS updates on this blog. Sign up for free by subscribing with your email for notifications.