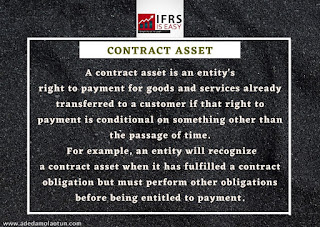 Welcome to IFRS is easy's Flash term for the week

Understanding the difference between Contract Assets and Trade receivables

Do you know that not all receivables from customers are recorded as trade receivables as a result of IFRS 15?

On the statement of financial position, trade receivables is presented separately from contract assets even though they are both receivables from customers.

The difference between a trade receivable and a contract asset is based on the conditionality of receiving consideration from the customer.

In simplicity, trade receivables are unconditional considerations (payments) expected to be received from customers for performing a particular obligation to the customer, while contract assets are conditional, because the entity will only be entitled to consideration from customer after satisfying a particular obligation.
Okay, don't get it twisted, let's look at this example.

If I promised to sell you two bags of rice and my payment is tied to delivering both bags of rice, the fact that I've delivered the first bag of rice does not mean I am entitled to payment from you since my payment is tied to me fulfilling the other part of the obligation (delivering the second bag of rice). Because there's a risk that I might not deliver the second bag of rice (performance risk), it is therefore important that readers of the financial statement are able to tell which one is a contract asset (meaning that not all performance obligation from my part has been fulfilled) and which one is a receivable (meaning I've fulfilled all performance obligations).

It therefore follows that as soon as I fulfill the remaining performance obligation, my contract asset then becomes a receivable in my books.

This means that a transition from contract assets to trade receivables is expected to happen after the entity has fully met the conditions of being entitled to consideration from the customer, meaning that once an entity has an unconditional right to consideration, it should present that right as a receivable separately from the remaining contract assets in its books.

Let's apply some figures to the earlier example and raise some adjustments to make this clearer.

What has happened in the second adjustment is that, upon fully satisfying the promise to the customer, and the condition to payment is now only passage of time, and not based on my performance, the contract asset earlier created from the first bag (N450) will be transferred to receivable, and the second bag will also be recognized as a receivable (550). If we are to split the second transaction, it would have been:

The above when merged results in the earlier adjustment we have upon delivering the second bag.

IFRS 15 requires that an entity distinguish between contract assets and receivables (trade receivables). This is because even though both assets have credit risk, the former has other risks such as performance risks. Contract assets are tested for impairment under IFRS 9, though are not to be classified as a financial asset under IFRS 9.

Contract assets are tested for impairment because they are subject to credit risk. An entity can apply the same approach adopted under IFRS 9 in impairing its receivables for its contract assets.


Watch video below explaining the difference between contract assets and trade receivables.
Don’t forget to bookmark the website and also click on the email subscription button so as not to miss any of our updates.


Written by:
Adedamola Otun
For: IFRS IS EASY

Posted by Adedamola Otun at 3:19 AM
Email ThisBlogThis!Share to TwitterShare to FacebookShare to Pinterest
Labels: Articles, IFRS 15, IFRS 9